A Short History of Batcombe 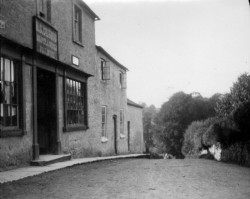 The name Batcombe is Saxon and probably means "Bata's Valley".  If so it is likely that the valley of Batcombe was first settled by this otherwise unknown Saxon some time after the West Saxons defeated the British at Penselwood in 658AD and began spreading west into Somerset.

The presence of the Celtic/Roman temple at Creech Hill and the Iron Age hillfort at Smalldown, both just beyond the parish boundaries of Batcombe, suggest that the higher ground around the valley may have been occupied before the arrival of the Saxons; and it is possible that there might have been a Roman settlement at Spargrove within the parish.

The first documented evidence for the existence of Batcombe comes in a charter of 940AD when King Edmund granted land at Batcombe to his kinsman Elswith.  This land was taken from the royal manor of Bruton and the boundaries defined in the charter are approximately the parish boundaries of today.  Shortly afterwards in 943AD King Edmund made Dunstan the abbot of Glastonbury Abbey and Dunstan began reforming and rebuilding the Abbey.  Either Elswith or one of his heirs gave Batcombe to Glastonbury Abbey, and it remained an Abbey manor until the dissolution of the monasteries some six hundred years later.

The Domesday Book of 1066 gives the first reference to a sub-tenant of the Abbey at Spargrove, probably fulfilling the abbot's obligation to supply a knight for the king's service from each of the Abbey's manors.  Gradually the manor at Spargrove grew separate from Batcombe with a moated manor and its own chapel, although the Abbey resisted this.

There is sufficient evidence to demonstrate that the village had a substantial community during the medieval period, although other than the 13th century chancel of St Mary's Church, very little in the village survives from this period of history.  This part of Somerset was known for its sheep runs and wool production and, by the 14th century, the wool industry was well established.  The farming origins of the village of Batcombe are still evident in the archaeological remains of the strip lynchets and the number of farms dotted along the length of the village.

Rather than relying solely on the wool-trade, the advantages of its location - the availability of flowing water and the proximity of deposits of Fuller’s Earth (a fine and strongly absorbent clay used to absorb lanolin and impurities from wool) - meant that Batcombe almost certainly had a small cottage industry of spinning and weaving cloth, with the process of fulling taking place at nearby mills in the valley.

The lack of pre-16th-century buildings in Batcombe can probably be attributed to the rise in wealth and status of the inhabitants.  As the cloth industry became more profitable, owners were able to substantially rebuild and modify their buildings to meet the ‘fashions’ of the time.

In 1539 the last Abbot of Glastonbury Abbey was hanged on Glastonbury Tor and the Abbey's lands were sold off.  The Manor of Batcombe was bought by James Bisse, a clothier from Stoke Lane (now Stoke St Michael) and a relative of the Rector of Batcombe, Philip Bisse.

Despite the religious upheavals, the 16th Century also saw the rebuilding of the Church of St Mary in its current form, with the addition of one of the last of the great East Somerset Towers around 1540, followed by the rebuilding of the nave and aisles.  It has been suggested that the rebuilding was funded by the Abbey who did not wish to see Henry VIII obtaining all its wealth, although it probably reflected the prosperity of local clothiers like the Bisses.

In the 17th Century Batcombe was staunchly puritan with two notable Rectors: Richard Bernard (1613-1641), widely known for his scholarship and learned writings; and Richard Alleyne (1641-1662) who refused to conform to the Act of Uniformity in 1662 and so lost his living, becoming an itinerant preacher.  In 1641 at the beginning of the Civil War men from Batcombe apparently attempted to raid the nearby royalist town of Bruton as recorded in the Bruton Registers:

"All praise and thanks to God still give,
For our deliverance Mathias Eve
By his great power we put to flight
Our raging foes the Batcombites,

Who came to harry, burn and slay,

And quite destroy our town this day"

Street.  Many of these new buildings appear to have been built for the purposes of processing or working cloth, or for housing cloth workers.  A number of the larger houses in Batcombe were also built or rebuilt at this time including Westcombe House (around 1750), Rockwells House, and Spargrove Manor (rebuilt in 1750).  In 1795 the new Rector, Thomas Coney demolished the existing parsonage house and built a new Rectory for himself (now Batcombe House).

The 18th and early 19th century also saw the roads into and out of the village becoming turnpiked by the Bruton and Shepton Mallet Turnpike Trusts. The earliest, turnpiked in 1756, was the route from Bruton in the south, along the Portway, passing to the east of the church and heading north along what is now Walters Hill towards Frome.

The 19th and early 20th centuries saw a gradual reduction in the population of the parish from 839 in 1831 to 439 in 1911.  This reduction was due to a number of factors - the demise of the cloth industry as a result of competition from the industrial mills in the north of England; the agricultural depression due to the import of cheap grain from America; the beginnings of agricultural mechanisation; and the fact that increasing industrialisation and ease of travel reduced the need for craftsmen and tradesmen living in the parish.

With the decline in the cloth industry and in the amount of arable farming, dairy farming and the production of cheese became increasingly important.  Mrs Edith Sage of Vale and Portway Farm, had won prizes for her cheese making as a young woman and in 1890 had been employed to teach cheese making across the county, working with a Professor Lloyd to produce a scientific basis to the making of Cheddar cheese.  After her marriage to Jesse Sage in 1900 she continued to teach resident students at Vale and Portway where Cheddar cheese was produced until the Second World War.

The 19th Century saw the building of a Wesleyan Methodist Chapel in 1817.  It was rebuilt in its present form in 1868.  The Chapel drew much of its support from the families of the village tradesmen but as the number of these declined so did its congregation.  After the last local lay preacher, Reginald Noble, died in 1965 the Chapel was closed and is now a private residence.

The 19th Century also saw the opening of the village school in 1842 after land near the churchyard was donated for this purpose by the owner of Church Farm in 1826.  The original school building was half the size of the present building and contained the residence of the master and mistress.  In 1887 the building was enlarged to its present size, with the master having his own cottage.  It continued to function as an all age school until 1932 and was closed in 1965 when a new primary school was built at Upton Noble.

It has been estimated that over 50 men from Batcombe served in the First World War, practically every fit man in the village between the ages of 18 and 40 and at least one who was underage.  The war memorial in Batcombe commemorates the eleven who did not return.  The war memorial at Westcombe also commorates Commander David de Beauvoir Stocks DSO, the son-in-law of Henry Ernest of Westcombe House, whose submarine K4 was lost with all hands in a training accident in 1918.

The sale of the Westcombe House estate in 1927 completed the transfer of most of the farms in Batcombe from landlords to owner occupiers.  The early 20th Century saw other significant changes to the parish with the first telephone in 1911, the first bus service in 1922, the arrival of electricity in 1933, and the construction of a wooden village hall next to the village school which was opened in 1934.  In 1938 the King George V Playing Field was opened in Batcombe after the site was purchased for £100, the money needed being anonymously donated by a parishioner.

In the Second World War as a result of reserved occupations on the land only eleven men joined up and there were no fatal casualties.  The war also saw evacuees, mainly children from the East End of London, arriving in the parish and detachments of various army units, including one from the US Army, who requistioned the new village hall and several houses including Batcombe House.

Mains water reached the village in 1952, although most outlying houses and farms are still supplied privately.  In the winter of 1962/63 heavy snow fell on Boxing Day and did not thaw until the beginning of March - in early January helicopters had to deliver food to the village which was completely snowbound.

In 1992 the Village Hall Trust bought the old village school to prevent the loss of the car park it shared with the Village Hall, restored the building and opened it as a community facility in 1999.  By this time the Village Hall was showing its age, with the wood beginning to rot, and after considerable fund-raising efforts the new Jubilee Hall was opened by HRH Prince Charles in 2002, the year of the Queen's Golden Jubilee.

Check out the Events page to find out what is going on in the parish of Batcombe.